For anyone following the Twin Amp repair you may find this info useful;
Here is the layout of the tubes for a Fender 1994 Twin Amp.
The installed 12A* Tubes are dual triodes of varying gains. V1A refers to the first half of the 12AX7 labelled V1 & V1B the second half etc.

First preamp stage V1A
V1A provides a gain of about 38 for channel 1, and about 49 for channel 2.
Signal then couples to a relay, which routes it to the channel one or channel two circuitry.
Relay K2B feeds the Clean Volume control (R11) to V1B which provides a gain of about 45.
Relay K2B also feeds the Gain control (R8) to the first stage (V2A) of the Vintage Drive circuitry.
V2A provides a gain of about 20, then drives the second gain stage (V2B).
V2B provides a gain of about 48.
The signal feeds through the Channel Two Gain control to the first stage of V3A and then to the second V3B stage overdrive circuitry. From V3B, the signal is fed to through the tone controls.
V4A is a split load phase inverter for the effects loop & the signal from the Effects Return jack feeds V4B.
V5 (12AT7) and T1 make up the standard Reverb Drive circuit.
V6A amplifies the reverb return signal. V6A should provide a minimum gain of 49. The
output from V6A drives the Reverb control, then sums with the dry signal.
V6B feeds the Cathode Follower V7B, which drives the Preamp Out jack.
The signal is normalled to the Power Amp in jack and then feeds V7A.
V7A contains the Presence control, accepts feed back from the output and feeds the
Phase Inverter V8.
Push Pull output section should require no explanation. 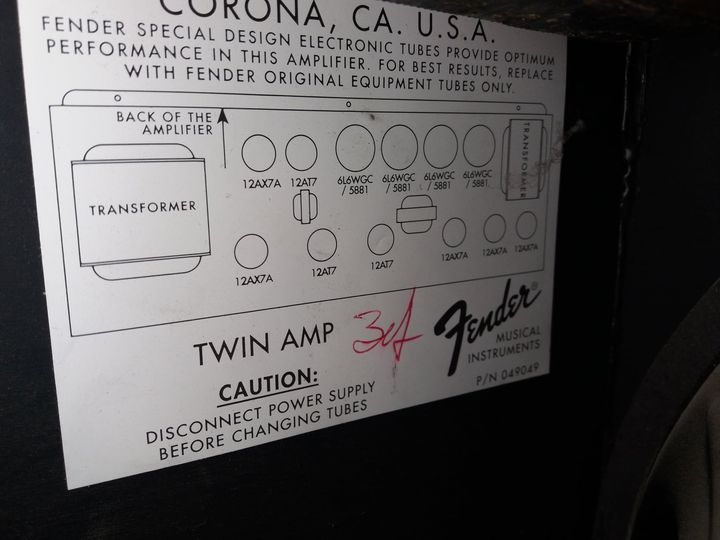